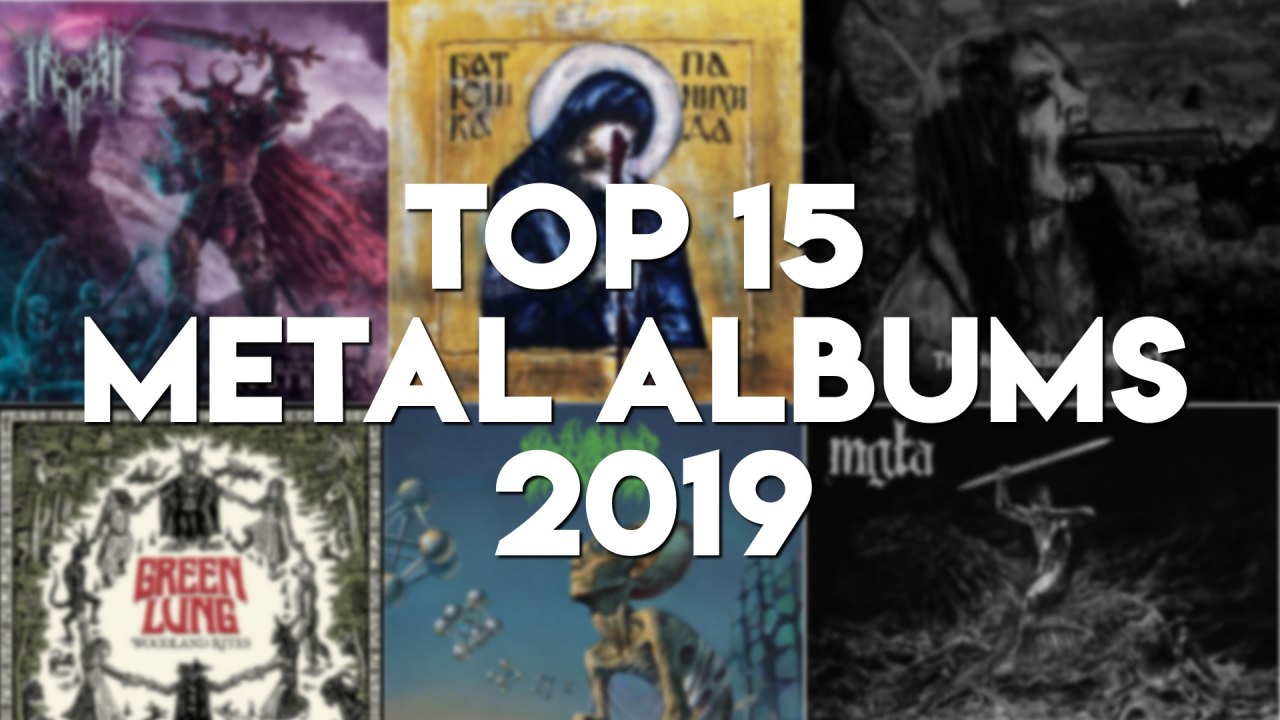 Rounding out the end of the 2010s in style, 2019 was a monumental year for metal music of all genres and persusations. As such, here at Pit of Plagues, we’ve found that limiting ourselves to ten mere records this year was just too difficult. Without further delay, here’s our extended list totally our picks for the top fifteen metal albums of the year, list is ranked in no particular order.

Hath – Of Rot and Ruin

An open that will no doubt be heavily featured in many other end of year lists, Of Rot and Ruin is a landmark victory in death metal music and the album stands head and shoulders above a lot of its competition for countless reasons. Taking the lyrics of FromSoftware’s Dark Souls and running with it in the darkest and most sincere fashion possible, Hath combined their love of the series with their unrivalled technical ability and truly a second is not wasted here on a fantastic atmospheric record that will stand the test of time for years to come.

Gaahl is a man that certainly needs no introduction if you’re at all familiar with the black metal scene in recent years. Gaahl’s Wyrd sees the ex-Gorgoroth singer and former Trelldom spearhead use his unique vocal range and creativity to utilise a more matured and slower dark metal album than what he has been traditionally known for in the past. The result is a very cold, moody and artistic expression of possession that gets in your head and refuses to let go. Getting to see many of the songs present on the album, including standout for me, ‘Carving the Voices’ was one of the most intense live performances I have ever seen, and a true testament to the band’s commitment to their pioneering craft.

Good old Darkthrone. Heavy, old school and unrelenting in their approach against modern conventions. The duo’s latest effort is a slightly faster and punchier 80s inspired effort consisting of six songs and heavily inspired by the likes of Motorhead, Venom and the like. It may be short but Old Star is certainly sweet, tracks like ‘I Muffle Your Inner Choir’ and ‘The Key is Inside the Wall’ will make any self respecting metalhead want to shred away on their axe to the catchy riffs, and bang their heads until they develop brain damage. In short, It’s Darkthrone. You know exactly what to expect from these guys, they don’t disappoint.

One of the freshest things to happen to the metal genre in a very long time, Green Lung’s debut record Woodland Rites set the world alight with their ritualistic 70s acid rock/doom metal hybrid that’s as infectiously catchy and addictive as the substances available at Woodstock in 1969. Out of everything on this list, Woodland Rites is one of the most listened to albums here. I personally just couldn’t get enough out of tracks like ‘Let the Devil In’ or ‘Templar Dawn’. It’s clear that these guys are inspired by all manor of acid rock and stoner music and the Londoners take full advantage of modern production with that proto metal flair to create something very special here. 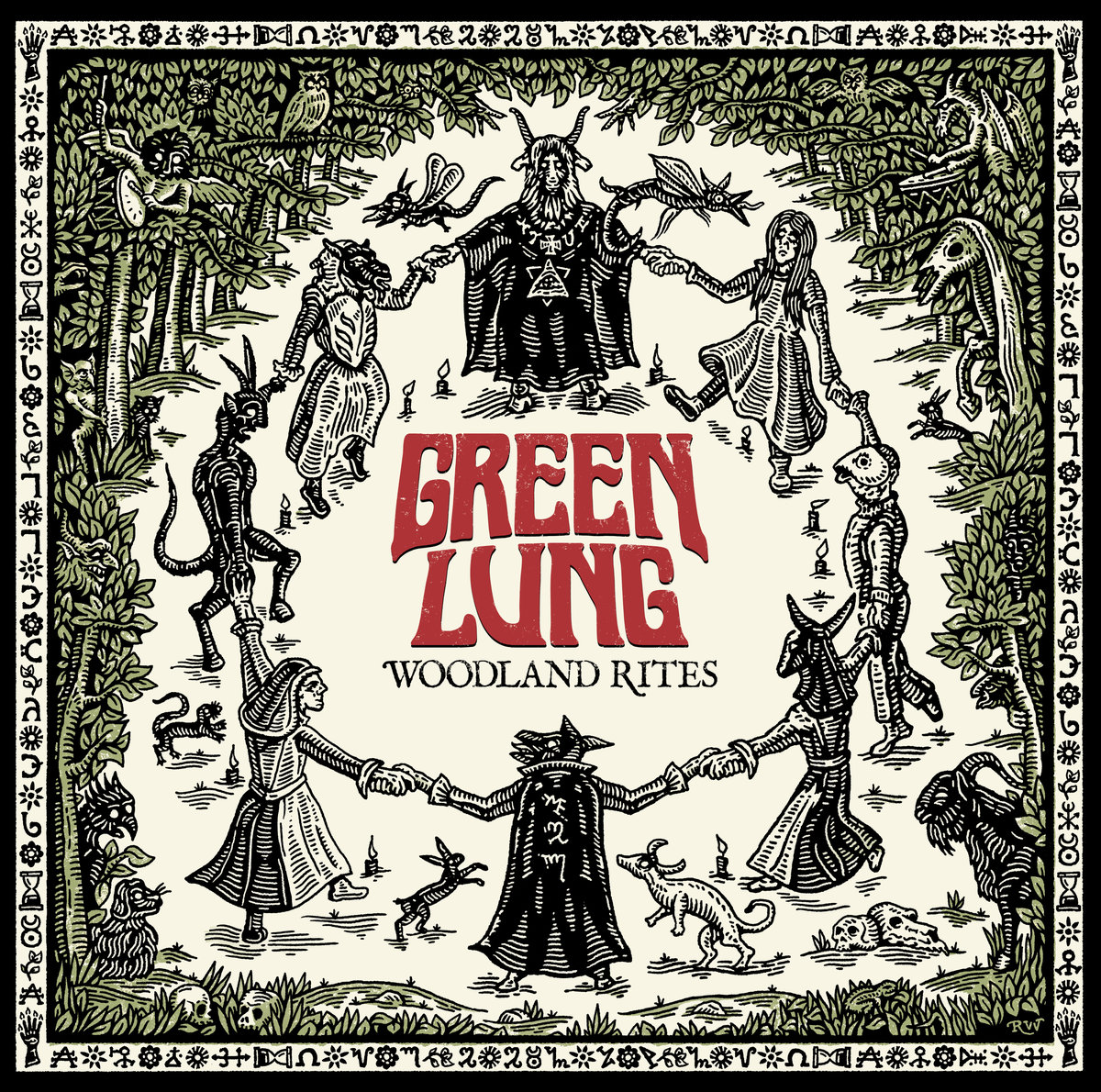 Insomnium have been one of my favourite bands of all time for well over five years now. Heart Like a Grave is another solid jewel in the crown of melodic death metal and continues that steady stream of atmospheric, folkish and melancholic melodic death metal that the Finnish rockers are well established for. Heart Like a Grave borrows and adapts from the band’s lengthy back catalogue in the best ways, it’s easy to hear something on this album and get that nostalgic feeling from The Day it All Came Down or One For Sorrow. That’s not to say that plenty of new and exciting things aren’t brought to the table here, because they are. Namely, the addition of Jani Liimatainen (Cain’s Offering) who brings an aura of bright and youthful energy to the guitar work which really works in the band’s favour, most notable on songs such as ‘Valediction’ as well as ‘And Bells They Toll’. Without question, Heart Like a Grave is not only one of Insomnium’s best albums, but also one of melodic death metal’s finest hours also.

The ultimate criticism of humanity, a depraved and misanthropic account that humanity is a plague that needs to be rid from the earth. True nihilism, true darkness. Age of Excuse is a black hole, a vortex that sinks forever never letting the listener catch a breath or see sunlight again. Powerful atmosphere and technical pounding drums permiate every facet of this modern black metal masterpiece from start to finish. Mgla very much are leading the charge in showcasing the best of atmospheric black metal with their own identity and polish to boot and Age of Excuse may be their best album of their career yet.

1349 are a band that I feel have never really got their day in the sun alongside their genre contempories. All that has changed with the release of the bleak and blackened The Infernal Pathway with strips back black metal to its raw essentials, relying only on old school blackened shredding and thrash technique and catchiness to spread their message. This record doesn’t reinvent the wheel, but what it does it take you back to the times of the first wave (Bathory especially) and remind us all why we fell in love with black metal in the first place.

Evil Dead wears its black and dried up heart on its sleeve and is unashamedly primal in execution. It’s a record that isn’t afraid to slow down and let a knuckle-dragging caveman riff or tremolo bridge ride on for a few minutes and let the listener soak in the heavy and overbearing punishing nature of the music before unleashing on songs such as ‘Day of Damnation’. In a year with so many phenomenal death metal records, Evil Dead is one that fans of the genre should not pass up on.

Pissgrave are a band that don’t give a fuck about anything! If that isn’t already self-evident by the album cover or the raw and eerie approach to their simplisitic song writing prowess then I’m not sure honestly how else to convince you. On Posthumous Humiliation, the band boil down death metal to the bone and deliver a wretched abortion of grinding guitars, putrid drums and demented vocals in such a fashion that only they themselves could pull off without it all going to shit. A lesser band with the same parameters would crumble under the circumstances but Pissgrave rise above their unique soundscape and put out one of 2019’s most punishing records without breaking a sweat. 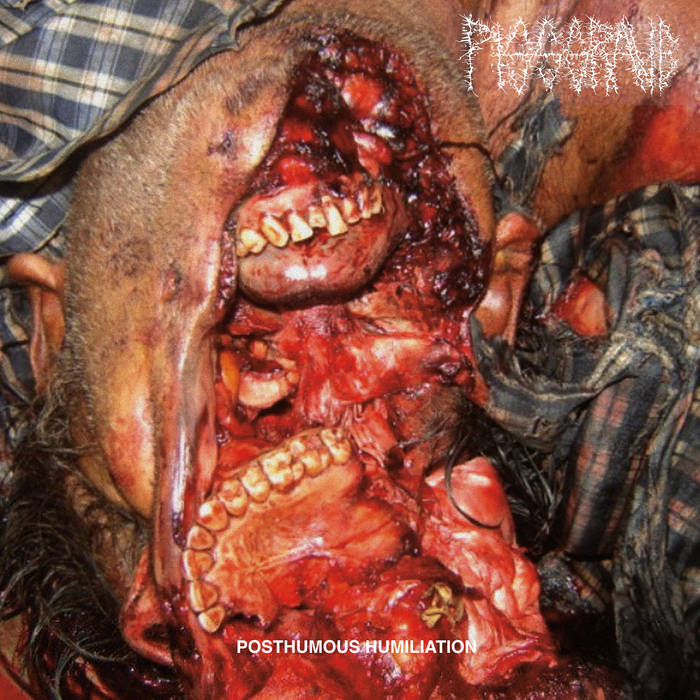 One of the most surprising albums of the year for me, Syria’s very own Absentation floored me with their catchy, punchy songwriting and melodic guitar playing. What was especially impressive, I found, was that Absentation is the work of one man, and you would be damned if you knew that from your first few listens. Without a doubt, The Intellectual Darkness has been one of my most spun death metal albums of the year and it’s mostly because I just can’t get enough of the thrashy and in-your-face attitude or catchy death metal riffs that can be found on tracks like ‘Thoughtless Thoughts’ and ‘Endless Insanity’. The man behind the band has promised that 2020 will yield an even bigger and more technically impressive album in the near future so stay tuned to the page people, you never know, this might not be the last time we see Absentation on an end of year list.

I’ve used the term old school a lot in this list so far and no more is it fitting than when describing Blood Incantation’s latest effort, History of the Human Race. Bands like Immolation come to mind in the latter portions of the record and it’s inspiring to see a death metal band in the late 2010s have the guts to throw a near-20 minute epic of a song as a finale to an album. There’s little more that I can add that hasn’t already been said, so I’ll keep it brief. Fearlessly blending psychotic death metal with trippy space-like atmospherics, Hidden History of the Human Race sounds and feels like an album that could have been released thirty years ago, giving it a a timeless feature in the halls of metal history. It’s something brave and exciting that definitely should not be glossed over. 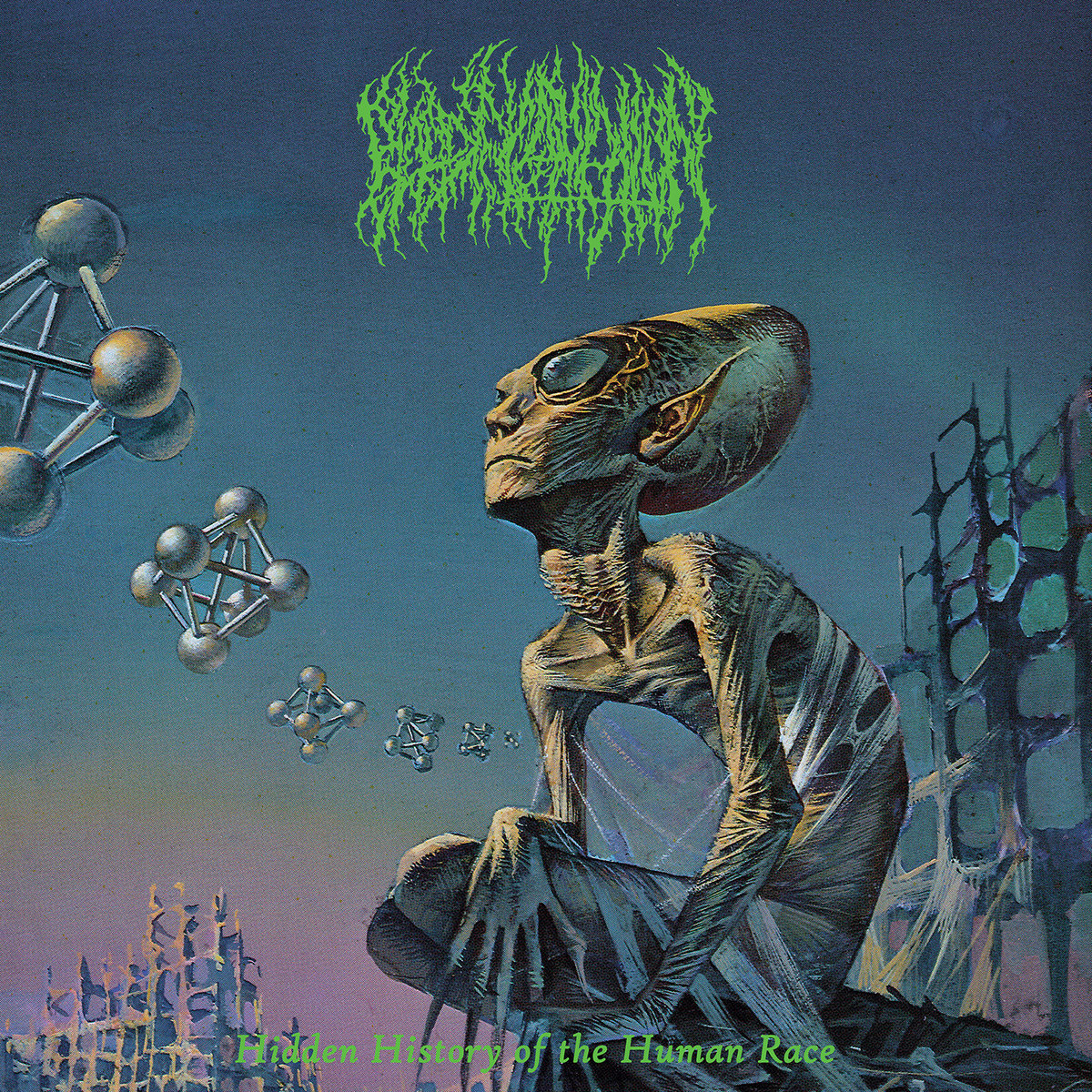 Without question Negator have pumped what is the standout black metal record of the year. Combining the likes of modern Dark Funeral with the straight up and uncomprimising approach of bands like early Behemoth, Negator’s newest album is as fast and as dark as the best that Norway has to offer whilst grinding away at fearsome speeds at times. It might not be the most wholely original effort on the list but Vnitas Pvritas Existentia takes the best of black metal’s recent years and polishes it to a mirror shine.

Is it any surprise to anyone that this record would show up here? I’ll keep this review short as I’ve already written a lengthy review on this very site, link below. However, The Grand Disillusionment is a groundbreaking, bold and modern depressive black metal album that encapsulates the human condition, self-loathing and hatred for all of mankind in a way never done before. Its brazen and unforgiving approach is uncomprimising and the way the album never really slows down in its intensity makes it especially scarring. 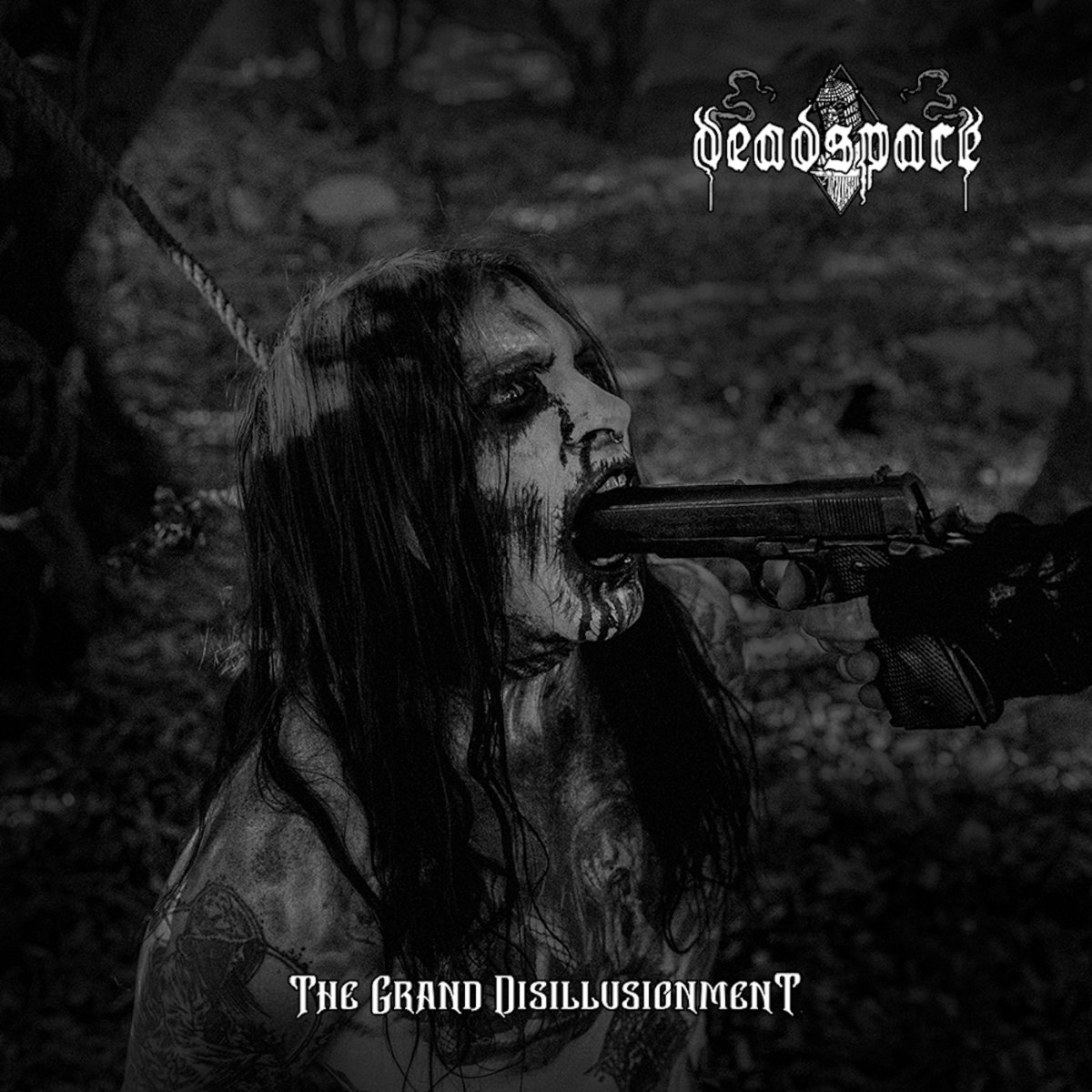 Forget the controversies, forget the in-fighting and the meme of a million bands all using the Batushka name and let’s focus on the original and the best for a moment. Derph’s true follow-up to 2015’s Litourgia hits every note that the debut did and more with an album that is darker, edgier and more chaotic in every way. Panihida stands head and shoulders above anything done by Bart’s poor imitation, (If you can call the trainwreck that is Hospodi an imitation and not a complete fucking failure to music) and shows all unequvically that the true king is here to reign forever more. Everything is more developed and more concentrated here than on the debut, such as the chanting and clean vocal passages and the thick blackened tremolo audio assaults. It’s more of something you love.

Inferi – The End of an Era | Rebirth

It’s hard to exactly pinpoint just what makes Inferi so special on a record such as The End of an Era but any speculation going into the album are quickly washed away by some of the most captivating and spellbounding technical guitar playing to ever grace modern melodic death metal, or modern metal generally speaking. A very tightly focused and incredibly sharply executed release, End of an Era encapsulates the many amazing developments in the way we perceive metal music and how the genre can transcend the boundaries of our known understanding and evolve into something greater of almost indescribable energy and passion. It’s a true marvel to relish in and yet another example of just how talented this band are and how earned their rise through the ranks in recent years has been.