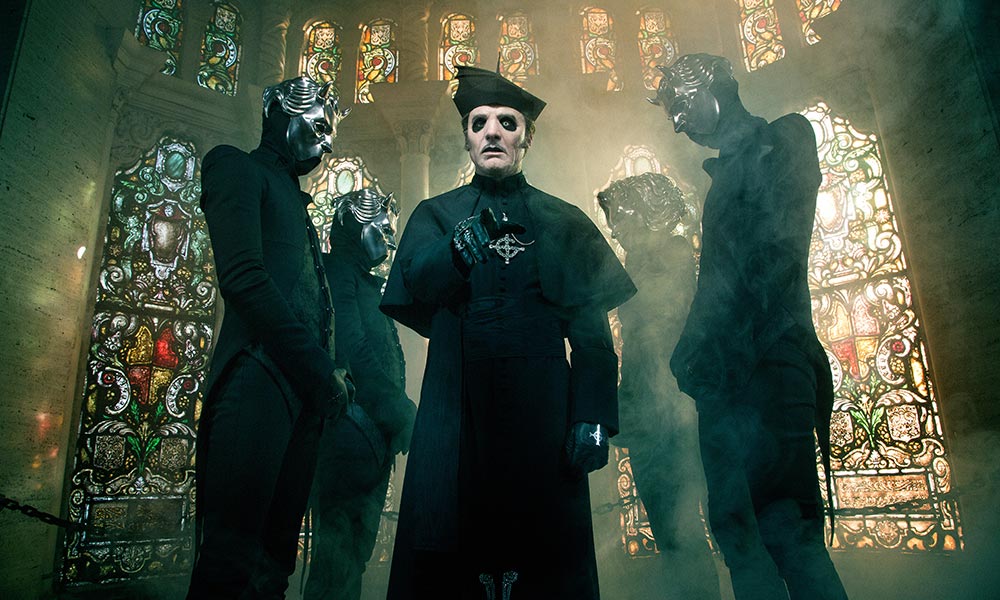 Ghost are a Swedish rock/heavy metal band from Linköping, Sweden, formed in 2008 by Tobias Forge. In the last decade they have become one of the most prominent names in the industry, having released four studio albums, as well as performing arena tours with the likes of Metallica.

With the new leader appointed, Papa Emeritus IV, and a new record likely around the corner in 2021, there has never been a better time to review and rank one of music’s most creative forces, as we take a closer look into their discography, ranked! From worst to best.

Their most recent release, at time of writing, did a lot of things right. By attempting to go in a pitch-black lyrical direction and taking influence from pop and shock rock of the 1980s, Ghost struck a confident and catchy balance of hope and gloom contrasting throughout the record.

There are some truly incredible songs on this release, including the likes of: Rats, Faith, Dance Macabre and Witch Image, but overall the complete package left a little more to be desired. Just over 40 minutes in length but featuring three interluding instrumental tracks, I can’t help but listen to this and simply wonder, ‘where’s the rest of it?’

When this album is good, it’s incredible and boasts powerful performances from Forge and his newly assembled team of touring musicians, in a few ways it just lacks the magic of what came before.

Without question, Meliora was a record published at the height of the band’s popularity and features some of their most well known works. Forge’s Papa Emeritus III persona remains the most well realised and well loved incarnation of the character, and everything about the younger, more sexualised, frontman fit the looser pop-oriented motif of this record perfectly.

This album is a little more guitar-driven that what was found on their previous record but, for the most part, favoured catchy melodies and pop hooks than delivering on the overt Satanic premise of what came before. Monolithic efforts in rock were created here including the almighty From The Pinnacle To The Pit, haunting Luciferian love song He Is and the Grammis award winning Cirice. If the album had a little more of songs like this and not some of the filler tracks like Spirit and Majesty, then no doubt it would rank higher. It’s a crime Zenith was left on the cutting room floor.

Let’s preface my opinion here by saying that I believe Opus Eponymous to be one of the most important rock albums of the last decade. A winning combination of Blue Oyster Cult, Black Sabbath and Deep Purple combined with a Satanic indoctrination theme melded beautifully together.

What originally began life as a song for previous rock band Magna Carta Cartel, Stand By Him, is one of the greatest classic metal songs in history, in no small part are the likes of Ritual, Elizabeth and Prime Mover far behind either.

Taking a stripped back approach to rock and roll and insidiously inserting ghastly messages into it worked to an insane degree, and Opus Eponymous benefits greatly from such a strong set of songs, immaculate production and nail-biting atmosphere.

With an album name that translates directly to ‘the most hostile’ or ‘the biggest threat’, there should be no confusion over the intention of this album. Defiant to its very core in opposing the Christian religion, featuring not only the band’s darkest lyrics and imagery, but also their best songs ever written.

Ditching the classic rock elements of Opus Eponymous and instead switching out to full on old school doom metal, Ghost hit their stride with anthems like Year Zero, Monstrance Clock, Idolatrine and Secular Haze. There’s an aura of evil that permeates every second of this album, and the fact that it is this memorable and melodious in the face of that, is quite frankly astounding.

The most sinister version of the band and their leader complimented by their most sinister ethos and heaviest songs, It should be no doubt that Infestissumam takes top spot on the list.