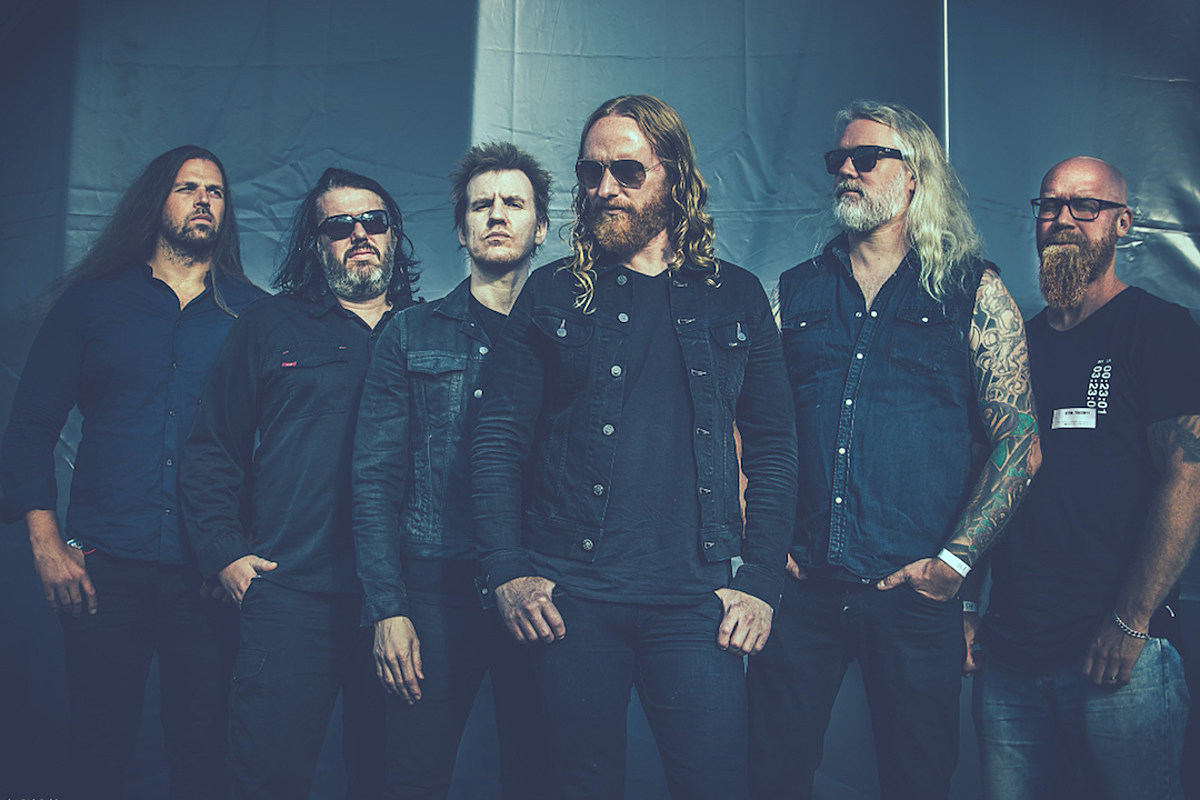 Dark Tranquillity are a melodic death metal band founded in 1991 in Gothenburg, Sweden. Along with bands such as In Flames and At The Gates, Dark Tranquillity pioneered the genre, cultivating what we now know the Gothenburg sound.

With the upcoming release of the band’s twelve studio album, Moment, set to unleash in November 2020, the time has never been better to take a careful but critical look back at one of Sweden’s finest metal band’s discography.

As with every ranking list, sometimes hard decisions have to be made and occasionally that means throwing a great album to the bottom of the pile. Truth is, Haven is a fantastic alternative metal album. The caveat? Haven follows very much in the footsteps of 1999’s Projector and leans more on crafting rich atmospheric and moody synth and piano landscapes rather than the chaotic riffage and aggression of prior records.

Standout tracks include: Haven, Not Built To Last and Indifferent Suns.

Personally I love these two albums, but I can also strongly say that I like a little more bite when I switch on a Dark Tranquillity record. By no means bad, just a little different, and that’s why Haven is where it is.

This record is just as strong as any that come after it on this ranking list, but what lets Character down from achieving any higher here is how most of the songs tend to blend together. Coming hot off the trail of their previous album (2002’s Damage Done) Character laid the blueprint for what would essentially become the Dark Tranquillity sound going forward, that every album would continue to borrow from even to this day.

Not to say that Character is lacking for riffs, it certainly isn’t, and razor sharp songwriting in tracks such as Lost to Apathy and Am I 1? are staples in the band’s live catalogue for a good reason.

Why so low then? Well, with an album like this surely the only way to go is up. Simply put, Dark Tranquillity evolved and refined the formula found here so many times and so masterfully that time has almost made this record a lesser one in hindsight.

I would be lying if I said that I have spent a huge amount of time with this one, but here we are all the same. I’ve span the record a few times, and it’s a very bright and upbeat sounding album, something I wasn’t expecting, but a welcome surprise regardless. There’s something about this new release that I can’t quite quantify as to why it feels a little less special than the likes of We Are The Void, Atoma or Construct. What we have here is a great metal album, but a truly fantastic Dark Tranquillity record? I am not sure. My mind is really in two places with this one. It’s not a bad release whatsoever. I enjoy every song on here for different reasons, and the production is top drawer as expected, everything falls into place well.

I am just unsure as to why I am not more excited about the first DT record in nearly half a decade dropping. I think that summarises my feelings more than anything. It’s been four long years since Atoma, a record that was one of the band’s best, and same time, Moment doesn’t do too much to innovate on those principles. It’s unfair, as Moment is a few days old at time of writing, but right away, it wasn’t as impactful as that record, or some others on this list. In hindsight, maybe this will change. Keep an eye out for the end of the year list to see where Moment slots in, if it all. I may be singing a different tune. Key tracks: Phantom Days, Identical to None, Eyes of the World.

Accused by one detractors as an ‘album on auto-pilot’ but a record that I think is much better than a concerning amount of listeners give it credit for, Construct largely plays it safe and carries the general themes from prior musical outings that we will get to later, (Fiction, We Are The Void Etc.) this release has its shining standout moments in the form of songs such as Endtime Hearts, Uniformity and What Only You Know.

Really, it’s almost unfair to compare Construct to We Are The Void as that album, and precursor Fiction, contain songs that blew up for the band in a way that singles here failed to resonate with, for whatever reason.

Dark Tranquillity took the elements that worked on Projector and Haven and injected a little more bite of their prior sound into this record which shares its dna with the earliest of the band’s output whilst also benefiting from their more experimental ventures.

Monochromatic Stains instantly springs to mind whenever this album is brought up in conversation and The Treason Wall is always an easy crowd pleaser for brightening up an evening with some modern melodeath. It’s easy to see why Damage Done may have been overlooked by many fans, existing in a void between two very distinctive eras of an ever changing band and never really settling for either, but carving out its own identity between the cracks.

In brief, a genre defining album from a band very set in their ways. It’s clear by this point that Dark Tranquillity’s blend of electronics, synths and pianos emulsified with fierce razor guitars and Mikeael Stanne’s fierce metal rasp is here to stay, as stated before, they could only go up from here.

We Are The Void features the incredible singles; Iridium, Her Silent Language and The Fatalist. These three songs in particular are so great that they easy push this record over the edge with what would otherwise be considered a safe and no thrills modern melodeath experience.

Without a doubt this is Dark Tranquillity’s most experimental and strangest album to date and for that reason I can’t help but love almost everything about it. What may have come as initially quite jarring from a band as rash and relentless as this to feature slow ballads, heavy use of clean vocals as well as lengthy piano passages, Projector proved that sometimes slowing down a little can pay off immensely.

Turn your attention a song such as Day To End for example, here’s a track with a Depeche Mode-style 1980s 808/synth beat as Mikeael’s low baritone cleans elevates the material beautifully. Auctioned is very much of the same vein, as you’ll also come to see on Dobermann too.

Not to say that the band have gone soft here. Bulldozers like Undo Control and The Sun Fired Blanks are more than sufficient efforts to the contrary and On Your Time is no slouch in that department either. Even if that’s only half the story.

This is an album that would otherwise be held in the shadows of what came before, if it wasn’t for the simple fact that Atoma features one of the strongest sets of songs ever put together by the band, as well as some truly incredible singles and one absolutely flooring closing song.

Clearing Skies is my personal highlight on Atoma. Swelling atmospheric acoustic guitars violently cascade into some stunning lead guitar progressions and dreamlike underlyings of synth and piano that give way to Stanne’s most passionate vocal performance in a decade. Really though, many of the tracks on offer here largely follow suit. It’s catchy, with amazing atmospheres and gorgeous progressions from beginning to end, it would be criminal to give this a miss.

This album is essential listening for anyone even vaguely interested in Sweden melodeath or death metal in general. The only reason it doesn’t take top billing is because Skydancer is very much a primordial offering of a band that had yet to even really be called a band.

At the time, the Gothenburg scene as we know it wasn’t really anything more than a few young dudes in a quant Swedish town who lived near one another and enjoyed metal music. Vocals on this record were performed by the almighty Anders Friden of In Flames, just as current vocalist Mikeal Stanne was the driving force behind Lunar Strain that same year.

Everyone knows by now just how memorable and riff heavy this incredible album is from Nightfall To The Shore of Time all the way to Alone. It is an album that really deserves no further explanation, listen to it and love it, simple.

Putting a modern melodeath album above a classic?! Am I crazy? Well, before you burn my house down in righteous anger, let me explain. Fiction was my introduction to Dark Tranquillity as they are now, of course I had heard all the classic albums, from Skydancer to The Mind’s I, but after that grace period, my knowledge of the band’s later output was conservative to say the least.

Then along comes Fiction and single handedly redefines exactly what melodic death metal could be post-2000 in a way that other Swedish bands never quite managed.

It’s difficult to even know where to start with my thoughts on this monumental achievement of an album, it really is that good. Do I begin discussing the lush soundscapes and pounding anthemic choruses of tracks like The Mundane and The Magic or Terminus (Where Death Is Most Alive) or should I stop wasting time and divulge the divine greatness of Misery’s Crown?

If I don’t stop gushing now then just frankly we’ll be here all night, so I’ll leave it here. Listen to Fiction. If you like amazing metal then listen to Fiction, hell, if you enjoy music with a message and emotion of any kind, then you have no excuse to not spin this record immediately.

Take all the praise that I heaped onto Skydancer and amplify it by a million. The Mind’s I is the culmination of a band creating and then perfecting the perfect old-school Swedish melodeath sound.

The Mind’s I is Dark Tranquillity’s heaviest album and features a generous helping of infectious and tasty guitar riffs on top of more breathtaking guitar melodies that intertwine in an almost orgasmic fashion.

Irrevocably, this release is a complete and total triumph from start to finish and an album that I return to more than I care to admit. Three albums in and this era of the band were simply titans on top of the world, and give it a few minutes of your time and you will see why as well.

Is The Gallery the greatest Dark Tranquillity album ever released? Yes.

Is it the greatest melodic death metal metal record ever put to tape? It can certainly be argued. I am almost at a loss for words for describing exactly what makes this release flow so effortlessly, but in a way, isn’t that the kind of intrinsic, ethereal beauty that we listen to metal for?

One listen to Punish My Heaven or Lethe and I dare say that you may become addicted. I know after my first time that I wasn’t the same person I was beforehand. Stronger than any drug, a higher percentage than any bourbon on planet Earth, the sheer irresistible and immovable force that is, The Gallery! Words really don’t do this one justice, if you only listen to one album after reading this feature article, then do yourself a favour and make sure it’s this one.