Sacred Son’s second offering is bigger, broader and better in every way over the original.

In 2017 Dane Cross rose to prominence with his solo black metal record Sacred Son, infamously with a controversial cover art of the man in black sunglasses enjoying his holiday. The photo meant that the internet was ablaze in conversation over what this meant for the genre when ultimately all anyone should, and evidently did, do is scratch under the surface to find a pretty fantastic black metal album underneath in its own right. Proving that you shouldn’t judge an album by its cover.

Fast forward two years and Dane Cross has assembled a full band to play their blend of middle class black metal and the results are impressive and charming in their own right. Arthurian Catacombs starts as it means to go on with an ominous ambient piece which are continiously peppered in throughout the run time of the record.

Three dedicated atmospheric intrumental tracks to be specific, not counting the times where the blast beats and howling shrieks halt to make room for blackgaze instrumentals in the same vein as bands such as Deafheaven or Alcest have been known to do. These portions of the record are utilised in a very intelligent way and serve to break up the unrelenting black metal assault which comprises around half the album.

Make no mistake in understanding that this album’s no slouch when it comes to its riffs and savage vocal delivery. While Dane may not be the one playing a six string anymore, the two guitarists brought in for the project, Dawn Walker’s Mark Norgate, and Stuart Gardham, do an excellent job in retaining the core identity of what made the debut so fresh whilst giving the record a much grander feeling in terms of both its scope and the deeper, more well rounded mix.

ArthurCatacombs is a steady evolution on what made Sacred Son’s first album so impactful whilst innovating with a few new ideas. It’s unlikely to change the minds of those who couldn’t see passed the debut’s cover, and for those who couldn’t again, they’ll be doing a disservice to themselves because Sacred Son’s follow up is the different and original take that black metal really needs in 2019. 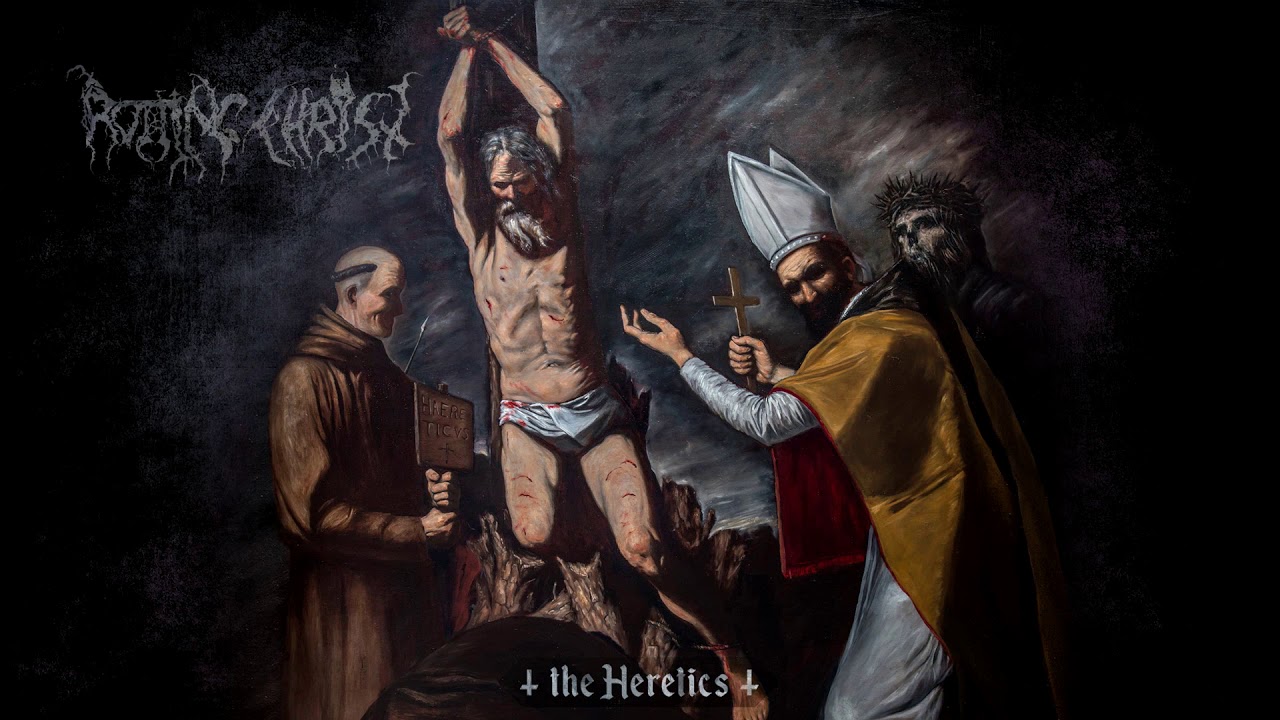 The mind is a universe, it can make a Heaven of Hell and a Hell of Heaven. Blasphemy refined on Rotting Christ’s latest effort.

It’s been a busy period for Rotting Christ in the last few years what with the band celebrating their 30-year anniversary recently with the release of not only Non-Serviam: The Story of Rotting Christ, but also with compilation album Their Greatest Spells to reinvigorate interest in the band. That said, The Heretics is a strong if safe follow up to Rituals which delivers on their core tenants masterfully whilst not bringing much new to the table.

Right from the off-set Rotting Christ deliver their signature pulse-pounding, primal palm muted chug-a-long riffing style in the same vein as what was found on Theogonia and Aealo, as In The Name of God ushers us in the way it means to continue. The spoken word pieces which open the record and permeate the album overall do an outstanding job of cementing in the band’s firm anti-religious stance, albeit in a very on the nose and non-subtle fashion.

‘Since man cannot live without miracles, he will provide himself with a miracle of his own making’ and ‘Those who can make you believe absurdities can make you commit atrocities’ are among the sharpest lines delivered masterfully in this spoken word style and moments like this I believe are the most unique and striking things about The Heretics to me. The album displays a maturity and developed literary sense which shows off how intelligent and well read Sakis is and these themes are carried well from start to finish.

The album is laden with callbacks to previous efforts from the band all around. ‘Vetry Zlye’ sounds as though it could be right at home on the tracklist of Aealo and is a welcome reminder of the one of their strongest records ever recorded. In the same vein, ‘I Believe’ has flavours reminiscent of their 2002 record Genesis with a track blisteringly aggressive sharing riffs in league with songs such as Demons and Nightmare. I could go on.

The lead playing in the guitar work on offer is among the best that the band has ever offered. The solo on Fire, God and Fear is one of the greatest to ever grace a Rotting Christ album, and the soaring emotion that rides throughout their beautifully told rendition of Edgar Allan Poe’s The Raven is stunning in every sense of the word. What we have here is a masterfully crafted and ambitious thematic release which largely delivers on its lofty promise.

Despite having a strong literary focus and delving deep into the philosophy from the likes of Dostoyevsky, Neitzsche, John Milton and Thomas Paine among others, it’s a shame that the same level of depth could not be applied to the lyrical content of the album. This is where the weakest link of an album of such promise begins to slow. For too much of the release, the same repeated lyrics about fire, death, heaven and hell are present in almost ever track and whilst serviceable and appropriate now and again, I believe their overuse and over reliance boil down complex themes into something too simple for what they are trying to express.

Lyrics aren’t the most important part of a metal album to me so it is not a big problem but it seems like a glaring fault in what would otherwise be a very thought provoking record. It’s intelligent for sure, broadcasting a strong not too subtle message but it could have been elevated further with lyrics that really stuck with you.

Themis behind the kit is masterful as always and his primal no-thrills drumming style is once again embraced with open arms. He isn’t the most technical drummer on the planet but nor does he have to be as the slower double kick beats and marching rhythms that charge along pounding against the guitars does the job beautifully. At the very least you will slowly be headbanging to songs such as Hallowed Be Thy Name as it rolls along at a gentle pace, and at The Heretics most aggressive, giving yourself whiplash with the build-up and chorus to I Believe.

There is not much new on display to report here but it feels like a refinement of everything Rotting Christ has been for the last decade or so. If you are familiar with the band’s work post-2007 with Theogonia onwards, you will be right at home here for better or for worse. Rotting Christ have carved out an entire new sound for themselves and are very happy continuing to refine, iterate and build upon what would come to define them in the modern age. It’s a truly great release which stands among their best of the recent material and well worth your time. It won’t change your world but it offers some great moments which should not be missed under any circumstances. Non-serviam!

A blessing or a travesty? Under Bodom’s spell for their tenth album.

The last decade or so of Bodom albums have certainly been somewhat of a rollercoaster in terms of quality. For albums such as 2013’s return to form, Halo of Blood, there was the middling follow up release I Worship Chaos. Indeed it seems that with Hexed, the band takes a stripped back approach and it largely pays off for the most part.

The biggest addition to the album is the return of the long dormant neo-classical style which flavoured early records such as Hatecrew Deathroll and Follow the Reaper especially. Hexed is full of old school flare and doesn’t disappoint on the guitar side of things.

The singles prior to release gave us a strong idea of what to expect going into the full album with This Road and Under Grass and Clover leaving a lasting impression on me. I feel a similar way with how In Flames’ I, The Mask returned to old school roots too as I do here, It felt to me once I heard these two songs that their work prior to Blooddrunk was returning in full force and the album carries that momentum throughout.

In terms of the guitar work present, I believe that the addition of Daniel Freyberg works wonders to spark the creativity from Alexi Laiho and give us those dual aspects in the richness of the rhythm and scope that we have been missing from Bodom since 2013’s Halo of Blood with long time guitarist Roope Latvala absence.

What we have here is a catchy album with a tonne of riffs and melodies to spare backed beautifully by a healthy dose of old school synth work reminiscent of their Follow the Reaper and Are You Dead Yet? which work astoundingly well.

Lyrically there really isn’t anything to hold onto here. You won’t find any deep meaningful insight or anything of note to ponder on once you have finished spinning the record for the first or second time, not that it’s ever been Bodom’s strong point. On that subject, Laiho’s vocals remain unchanged from how they have always sounded and simply put, you either love his shrill bark or you hate it. I’m in the former category, I enjoy his gruff power metal shriek, not quite a growl or a scream but it once again, as always, is entirely serviceable and he sounds good enough here.

The choruses are once again hit and miss as far as Bodom goes, its a modern trapping that the band cannot escape, whilst a lot of the hooks are indeed infectious ear worms, that isn’t always for the best as the lacking/juvenile lyrical content quality on offer here leaves a lot to be desired. I’ll admit, I have listened to the record a couple times and I have a decent feel for it despite every song not having the staying power as their older material.

Fans of Bodom’s earlier releases, I believe shall be very happy with the band’s latest offering. You may not find depth but what you will find however is a fun record that doesn’t outstay its welcome, which is laden with technical, melodic and inspired guitar work which culminate in what I believe to be their best album since 2005’s Are You Dead Yet?.